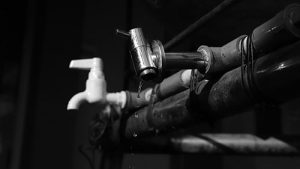 Sometimes, when watching a horror documentary, the family reports banging sounds coming from the ceiling or walls. Anyone who has a little know-how of plumbing might laugh it off knowing that this could very well be a plumbing issue rather than a demonic entity haunting the family.

Oftentimes you might have heard strange knocking noises from your pipes, which are harmless most of the time. But if these sounds persist and you hear proper banging noises, there might be a serious problem. These sounds can be heard randomly throughout the day, when the water is running or when the water supply is turned off. There can be three major causes of why your Pipes are making a knocking noise? Let’s look at these three reasons in detail and try to find out how we can fix the knocking noise in each case.

Do you hear a strange knocking sound only when you shut down the water supply and, if the water is running you hear no such sound, then your pipe might be suffering from Water Hammer. This might not sound like a potential problem, but in the long run, it can damage joints and connections inside the pipe, leading to a more serious problem.

In order to fix Water Hammer, you will need to follow these particular steps. In the first step, locate the pipe making these knocking sounds and see if any loose parts need to be corrected. After this, check the air chamber, which is located near your tap. This air chamber is built to absorb the shock of fast-moving water that is suddenly stopped. But over time, the air chamber gets worn out and needs to be refreshed. So, to fix this turn off the water supply to the house, then drain any left-out water through taps. After this, turn the water supply on to fix your issue and restore the Air chamber’s health.

The optimum pressure suggested is about 40-80 psi. Therefore, if the cold water pressure is above 80 psi, then you might need to install a pressure-reducing valve. Similarly, if it’s being caused by hot water, then you need to turn down the temperature of the water. But if turning down the temperature doesn’t work, then I would recommend you install a hot water expansion tank.

Another reason for the strange knocking noise might be due to the material of your pipe. If your house has copper pipes, then these tend to expand as soon as hot water passes through them. The optimum solution to fix the expansion of copper pipes would be to reduce the water temperature.

You can also add additional padding to the copper pipes if you are looking to remodel your house. Otherwise, this option won’t be necessary.

The knocking issue also arises due to thermal expansion if the CPVC (chlorinated polyvinyl-chloride) lines were not installed properly. The CPVC lines are responsible for supplying hot water to bathtubs and other accessories like washing machines. They also expand and contract due to hot water and thermal expansion. If the CPVC lines were installed in a very tight hole, they might not have enough space to expand when hot water passes. As a result, the lines rub against the wall due to friction and you could hear a knocking sound.

This issue should be more avoided rather than looking for a fix. The plumber needs to install the CPVC lines in a way that it has enough space to expand and contract freely. Otherwise, the knocking sound will arise again whenever hot water will run through.

Loose pipelines are another result of the water hammer effect that is explained above. Due to high water pressure, the pipelines supplying hot and cold water become loose and deviate from the strap that was holding them. Afterwards, water pressure causes the pipes to strike against the wall and produce a knocking sound in return. This issue mostly happens in masonry houses with bricked walls. You can easily notice the sound whenever you turn on a tap or shower and the sounds stop as soon as it is turned off.

Fixing this issue is as simple as tightening back the pipelines within their strap. If the straps are damaged as well, install new ones. Putting the pipelines back in their place will silence the knocking sound. However, don’t fix the pipelines too tightly and allow some space for thermal expansion. Else, the pipeline itself might get damaged internally.

Sediment buildup in the water heater

Water heaters often have sediment buildup in their tanks. During the heating process, minerals like magnesium and calcium particles tend to settle at the bottom of the tank. After the sediment buildup, you might face a constant knocking and rumbling sound as the water heater runs. This knocking sound is a result of bubbles forming and bursting in the sediment.

Moreover, this sediment also causes sudden fluctuation in water temperatures and a rise in energy bills. Clearing the water tank of any sediments require cleaning the tank by attaching a garden hose and empty the tank through the drain valve. It’s a rather complicated process that you should let a professional handle; don’t burn yourself.

Primarily, it falls onto the shoulders of the plumber or the construction company to smartly design the flow of pipelines and use a suitable material for the job. However, if an issue arises, it’s nothing to be panicked about. Plumbing tends to make weird noises as the house gets older. You can solve most of the problems yourself after consulting from different sources on the internet such as this very writing you are going through. Good luck.